Home / News / Wearing a Rosary as a Necklace Custom CMS block displayed at the left sidebar on the Catalog Page. Put your own content here: text, html, images, media... whatever you like.

There are many similar sample content placeholders across the store. All editable from admin panel.

Wearing the Rosary as a Necklace 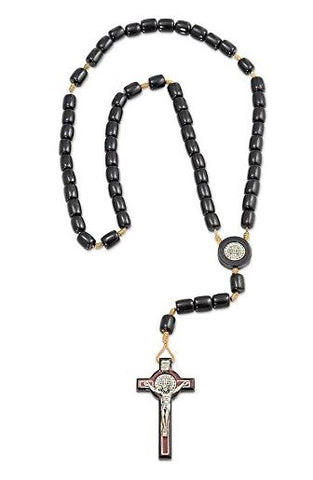 Wearing the Rosary as a Necklace

Q: I have seen people wear the rosary as a necklace and, in fact, I had a fifth-grader ask me during CCD if that was a sin. I told her that I didn't believe it was a sin per se, but that as it is a wonderful prayer and most favored by the Blessed Mother, that I thought it disrespectful, not very reverent (regardless if the rosary is blessed or not). The student promptly asked about my decade rosary bracelet, "What about wearing it like a bracelet?" It's a good question, in light of the cross and rosary "look-alikes" that seem to be ubiquitous these days in fashion jewelry. What do we tell young girls? — J.M., Leavenworth, Kansas

A: The closest resemblance to a norm on this topic is found in Canon 1171 of the Code of Canon Law. To wit: "Sacred objects, set aside for divine worship by dedication or blessing, are to be treated with reverence. They are not to be made over to secular or inappropriate use, even though they may belong to private persons."

It is probable that this law does not fully apply to our case, since it refers primarily to sacred objects for liturgical worship such as chalices and vestments rather than to rosaries. At the same time, the intimation to treat sacred objects with reverence and respect can logically be extended to rosaries, crosses, medals and similar items.

Also, wearing a sacred object is not the same as using it in a secular or inappropriate manner. In fact, many religious congregations wear the rosary as part of their habit, usually hanging from a belt. There are also several historical cases of laypeople wearing the rosary for devotional purposes. For example, in his book "The Secret of the Rosary," St. Louis de Montfort illustrates the positive results of this practice in an episode from the life of King Alfonso VI of Galicia and Leon.

I think that the key to answering this question can be found in St. Paul: "So whether you eat or drink, or whatever you do, do everything for the glory of God" (1 Corinthians 10:31). In other words, there should be no indifferent or irrelevant actions in the life of a Christian.

If the reason for wearing a rosary is as a statement of faith, as a reminder to pray it, or some similar reason "to the glory of God," then there is nothing to object to. It would not be respectful to wear it merely as jewelry.

This latter point is something to bear in mind in the case of wearing a rosary around the neck. In the first place, while not unknown, it is not common Catholic practice.

Second, in relatively recent times, certain controversial public figures have popularized the fashion of wearing the rosary as a necklace, and not precisely in order to "do all to the glory of God." It would also appear that in some parts of the United States and elsewhere, wearing rosary beads around the neck has become a gang-related badge of identification.

Hence, while a Catholic may wear a rosary around the neck for a good purpose, he or she should consider if the practice will be positively understood in the cultural context in which the person moves. If any misunderstanding is likely, then it would be better to avoid the practice.

At the same time, as Catholics we should presume the good intentions of the person wearing a rosary unless other external elements clearly indicate otherwise.

Similar reasoning is observed in dealing with rosary bracelets and rings, although in this case there is far less danger of confusion as to meaning. They are never mere jewelry but are worn as a sign of faith.

According to some sources, small single-decade rosaries or chaplets were developed in times of persecution, as they were easily hidden and could be used without attracting undesired attention.

They also became popular among Catholic soldiers on the frontline especially during World War I.

Far more important than the visible wearing of a rosary is actually using the rosary, including publicly, for prayer. Then it is truly done "to the glory of God."

In the wake of our comments on wearing the rosary as a necklace June 14, a reader who now serves as a lay missionary in Honduras offered the following observations:

"In my experience in El Salvador and Honduras it is not uncommon to see men and sometimes women wearing a rosary around their necks. The rosaries are often very inexpensive, of plastic or wood. The people who wear them are largely the poor, most of whom have a strong faith. Though it might be uncommon in the U.S. and Europe, I see it here more often.

"In some ways it's a way for the people — mostly, but not exclusively, young — to identify themselves as Catholics. Some lay pastoral workers wear them since they don't have a cross to wear around their necks.

"I have heard, though, that there are some gang members in cities in Honduras who wear the rosary as a sort of talisman, to protect them. I don't think it is a way to identify their gang membership but rather a way of seeking security in the very insecure world of the urban poor. That's another case altogether.

"But it is important to remember that here among the poor, the rosary around the neck, though it might seem to be a type of 'jewelry,' is an expression of faith.

"I don't know how often the young people pray the rosary, but among many of the people in the countryside here in western Honduras the rosary is often prayed — often in family groups, in base communities, or even over the Catholic radio station. The rosary, prayed or worn around the neck, is common here." I believe that this enlightening information completes and confirms the central thrust of the original reply: that this and similar practices can only be evaluated by taking local context into account.

> Faith has many ways to be shared and modern times are much different than prior decades. While family's may not all come to a local church, they can watch a live broadcast. A person may see religious jewelry as a way to praise and show respect for their faith. Wearing religious jewelry for reasons other than wholesome and loving praise is something that is upon those with other intentions. If vanity is in the mind and faith is in the heart, wearing religious jewelry suits your faith. If vanity is leading your heart, more faith may be needed but wearing religious jewelry for visibility is still acting in an influencer manner and to influence others about faith seems reasonable to most modern folks. Sacred objects that are directly connected to a physical church and used as a symbol to praise/worship your faith should not be used by individuals in private as a vanity statement, this would not be generally accepted.